Foresight for the staff

As far as social commitment is concerned , Prosuma has set up support for healthcare and participated in 2010 at the level of more XOF 210 million (€ 320,000).

The Group also put at the disposal of the employees an including medical and social service :

The Group also meets the needs of families and takes totally care of expenses connected to the death of a member of the company.

Prosuma also finances collective marriages the staff. In 2009, it concerned 66 couples, of which at least one of the spouses was a member of the Group and represented more than XOF 7.8 million (€ 11,900). The last collective marriage took place in november 2012. 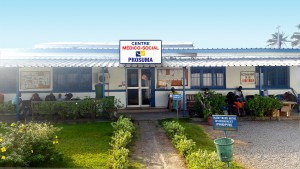 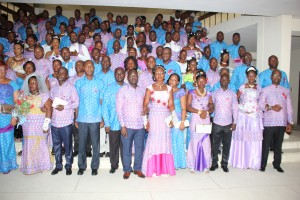 In the field of the leisure activities, a Christmas tree for the children is organized every year, for an amount of XOF 1.5 million (€ 2,300).

Finally, in conformance with the sport, the Group is member of the FIF (Ivory Coast Football Federation) and takes care of expenses connected to various competitions. In 2009, Prosuma was a finalist of the tournament of the inter-company teams organized by the FIF. The Group also won the Filtisac cup (other external match). In 2010, these activities represented more than XOF 5.7 million (€ 8,700).

On Thursday, October 18th, 2012, took place the ceremony of decoration of the PROSUMA agents, in the presence of Mr. Adama Coulibaly, Cabinet director of Minister of State, Employment and Solidarity. This event took place to the Palace of the Culture of Treichville. 220 agents received, hands of the Representative of the Minister, the Medal of honour of the Work: